In honor of poet James Longenbach, who died on July 29, the Friends of Writers Forum will post remembrances by his close colleagues in the MFA Program for Writers at Warren Wilson College. 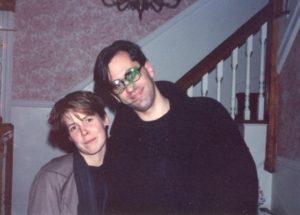 All of us here know how lucky we are to be Jim’s friends. My own luck began in 1987 when the University of Maryland, where I taught, hired Joanna, and Jim came along. By Thanksgiving Joanna and he were crowded around a gateleg table in our Baltimore rowhouse. So crowded was the table that the only way to eat was to slide a fork up your chest until it reached the vicinity of your mouth. In those conditions, a glass of red wine spilled that Jim took responsibility for and for which, even as recently as a month ago, he reminded me of. He cared deeply about that glass of spilled wine and it became a kind of touchstone of our early friendship, but more so of how sensitively and seriously he lived in the world. A few months later, Joanna and Jim were on their way to Rochester and soon my wife and I would be moving to New Haven, which would put us within range of a visit from them and provide the occasion for a memorable slumber party. Two things about that visit stand out: they were deliciously and infectiously happy and when Jim attached a long gumby-like gecko to the frames of his glasses so that it appeared to be scaling his face, he filled our sons with a wild glee. This was the first I’d seen of his goofy, playful, charmed and charming side, a side you couldn’t necessarily provoke but would appear spontaneously. What you could provoke from him was “side-splitting laughter”—his phrase—, especially if you told him a good story, like the one I told him about a venerable Czech poet who appeared on stage wearing one shoe, complaining that Italians made their shoes too small to fit both of his feet.  And it took no more than the mention of his beloved Venice, Italy, to elicit an endorsement like this: “Having martinis (but not any food, which isn’t worth it) at Harry’s Bar is FABULOUS—really really worth it. They come in little crystal beakers with olives on the side; tiny bar room, way cool…”. It was definitely and totally way cool to be Jim’s friend. We took deep and confiding pleasure writing to each other about family life, the thrills and chills of it. I counted on his insight which was acute and uncompromising in all matters. When I admitted being nervous about a lecture I was to give, he wrote: “Don’t panic about the lecture. Just pretend you’re me. This works. I pretend I’m you on many occasions.” He was vulnerable and self-revealing. When I told him that at 18, I was determined to become a poet, he answered, “all I wanted to do as a young person was figure out how to disappear.” Instead of disappearing, he became a bright, intimate, reassuring, cajoling, sometimes chiding and impatient presence and intelligence, beautifully invasive and addictive. I could never get enough of Jim and he was always willing to respond to that need. He made it seem as if he was just waiting for you, and only you. “There you are!” he liked to exclaim. And similarly, he would often sign off, Till Soon or More Anon. That graceful, nonchalant promise of another exchange or phone call. He was a master of a rigorous sprezzatura, seeming never to break a sweat no matter what he did. Nevertheless, he has disappeared, not that he wanted to, not this time. But that doesn’t mean he’s vanished because we have his remarkable body of work to sustain us. We have Alice, Kathryn, Marc, and Joanna to remind us of whom he loved most. We have each other. And yet, the nearer I come to disappearing myself I want what I can’t have, what each of wants, and that’s Jim himself.