It’s that time of year again: we’ll be adding updates to the Alumni Bibliography, so please email me about any recent book publications.
Include, in this order please:
(1) your full name
(2) the name of your book
(3) the name of your publisher
(4) year of publication, and
(5) specify poems, novel, short fiction, nonfiction, etc. (You may also include books such as anthologies that you have edited.)
(6) the year and genre in which you graduated.
Please send updates to me at [email protected], and put ALUMNI BIBLIOGRAPHY in the subject line. If you know of publications by alumni who are not on the list, please encourage them to get in touch with me, or send me what information you have.
The alumni bibliography (currently updated twice a year) is accessible from a link on the WWC MFA website:
Click Here
If you are unsure whether your new publication is included in the bibliography, please check it before sending me the information.
Thanking you in advance,
Patrick

To the class of summer of 2012 for their generous donation of $20,090.  This record-setting class gift, presented at the summer 2012 graduation ceremony of the MFA Program for Writers at Warren Wilson, will help Friends of Writers sustain and extend its work in support of the students, faculty and alumni of the program.

Speaking on behalf of the class of Summer ’12, Ellen McCulloch-Lovell pledged that the class will continue to add to this outstanding contribution.  Join them in this important work by clicking on the “DONATE” button at the top of this page. 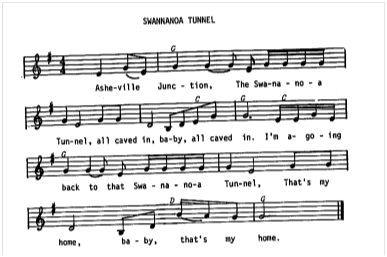 [The talk opens with the first two verses of “Swannanoa Tunnel,” as performed by Bascom Lamar Lunsford. A sample is available here.]

“Swannanoa Tunnel,” also known as “Asheville Junction,” has a mixed ancestry: the local grafted onto the mythic. Cecil Sharp, a British folksong collector, documented it when he traveled through Buncombe and Madison counties in 1916-18.  The isolation of these mountains made the area a rich repository of songs handed down from English and Scots-Irish ancestors—indeed, Sharp initially thought he’d happened upon a lost tribe of Elizabethans—and so he believed the song was an old English tune, mishearing the western North Carolina accent and transcribing Tunnel as Town-O, and hoot-owl as hoodow.  But it was, of course, a work song, a collaborative and communal blues ballad—a John Henry variant with new verses layered onto its nine-pound hammer base, composed by the convict labor that spent two years digging the Swannanoa Tunnel in the late 1870s.  At 1822 feet, this tunnel was the longest of seven struck by hand through these mountains to connect Asheville by railway with the outside world. Between 150 and 300 men died in the process; it’s thought that the particular cave-in referred to in the song happened in 1879, when 27 of the workers were killed.

Bascom Lamar Lunsford was a teacher, a country lawyer, a seller of fruit trees, a festival impresario, and ballad collector with a prodigious memory.  He was born in 1882 near Turkey Creek, NC –what is now Leicester, just north of Asheville, and as a young man he traveled around western North Carolina, and later into Tennessee, Kentucky, and West Virginia, gathering the old ballads and their attendant stories.  In 1949 the Library of Congress brought him to Washington to record over 300 songs and his stories of their provenance from his “Memory Collection”—the largest single collection drawn from any individual for their American folksong archive.

END_OF_DOCUMENT_TOKEN_TO_BE_REPLACED

A final shout-out, and then you won’t have me kicking you around any more: Final drop-dead end-of-the-line you’ll-be-sorry-if-you-don’t deadline to register for this year’s Goddard/Warren Wilson Post-MFA Writing Conference is this Friday, June 29. No late fee.

You’ve heard it all — the nightly readings, the good friends, the new friends, the new *readers,* the time to write, the workshops, Fiction Roundtable, Poetry Manuscript Reviews (yes, there are two of them this year), the dance, and so far it looks like: a caucus titled “The Writer who Loves Printed Books in the Digital Age,” a panel on doing (historical and other) research for fiction/non-fiction/poetry, classes “Creative Nonfiction: Boundaries and Ethics,” “Merry Christmas to Me: the Decision to Self-Publish,” one on Midwestern Gothic in poetry, and Marcia Pelletiere will be offering “more of an Experiment than a Class…I’ve worked with a group dream process for over 25 years, and it has occurred to me that some aspects of that process might provide an interesting way to work with imagery in a collaborative setting.” Have an image or character or setting you’re working on currently? Bring it on down to the rest of us, “Something like opening a window in a stuffy room….” And more in the works.

Don’t kick yourself for waiting till next year; email your intentions to [email protected] and then register and pay, electronically or by snail-mail.  Info and links at:

Teach a class, take a nap, write a poem, get up too early and go bird watching, take another nap and then write another poem. And Dance, if you like.

As I hope you’ve all seen, we’ve got a fantastic group coming to the conference this year, with several more signed up since I sent out the list. However, we really hope to get a few more attendees (we’re at 33 right now), so I’m happy to announce that the Conference Committee has voted to waive the $100 late fee for this year. In addition, the drop-dead deadline of June 23 has been extended to (postmarked) Friday, June 29.

You know you’ve wanted to come; take the plunge. Where else are you going to get the kind of time, focus, and attention to your work that you’ll get here? We’ve got people signed up for Fiction and Poetry Workshops and Manuscript Review (longer poetry collections) and Fiction Roundtable (longer fiction works). Or just hang out with a bunch of writers, a bunch of Wallys, as a matter of fact.

If you think you’ll be signing up, it would be great if you’d drop me a line at [email protected].

Really, are you seriously still sitting on the fence?

Good writing; see you in August.

The Summer 2012 MFA residency is almost here!  We’ll be posting public reading and lecture schedules soon.  In the meantime here’s Program Director Debra Allbery’s opening remarks from last January, which may just inspire you to revisit that lonely piece which has been languishing in your ‘drafts’ folder, waiting for your kind attention:

This talk begins with a stairway in Florence, in the Laurentian library which Giulio d’Medici commissioned Michelangelo to build in 1525.  He worked on the library’s vestibule and reading room for about ten years before he left for Rome.  Although Michelangelo himself wasn’t involved the stairway’s actual construction, it was built according to his specific written instructions and a clay model he’d made.  It was a marvel both in its reintroduction of architectural elements from the past, as well as in its originality and innovation. Giorgio Vasari, who not only chronicled the lives of the artists of the time but was one of those who built the stairway, wrote, “He made such strange breaks in the design of the steps and he departed in so many details and so widely from normal practice that everyone was astonished” (680).

END_OF_DOCUMENT_TOKEN_TO_BE_REPLACED

The 2012 Post-MFA Conference is only a few months away.  Remember, registration closes June 16th.

The Conference will surprise you. But the only way to know that is to come. Each year is different, and that’s the beauty of the thing. A conference is not a residency without faculty and it’s not a reunion. It’s a small summer oasis filled with peers who will amaze and encourage you, with laughter, with as much or as little work as you’d like. But the very best part of the conferences is meeting Wallys who were in the program at different times over many years – creating a lovely confusion of dates and faces. At last summer’s conference the attendees raised $900 earmarked for scholarships for recent graduates. But there are opportunities for everyone. So come. You’ll be happy. You’ll be surprised.”  –Nancy Koerbel

For more information, visit the Conference Info page at Friends of Writers.

We are delighted to announce that the first of many sets to come of our wonderful archival lectures have been cleaned, audio-upgraded, and digitized.  Ten terrific poetry lectures and classes delivered between 1989 and 2000, including ones by Heather McHugh and Larry Levis, are now available for download and sale. For a short time we are offering the first set at a special, celebratory low price.  Catalog copy describes each lecture, enabling you to have a good idea of what you are buying. Each lecture is introduced by Ellen Bryant Voigt and all monies raised go to the MFA scholarship funds.  For further details please see the FoW web page!

Stay tuned for the debut of the Warren Wilson MFA Program for Writers’ Store, featuring downloadable faculty lectures.  The first group of lectures will be offered at a celebratory discounted price, and all store purchases benefit Friends of Writers’ MFA scholarship funds.

Congratulations to MFA program faculty members C. Dale Young and Pablo Medina, who are among the 181 artists, scholars, and scientists who have just been awarded 2012 Guggenheim Fellowships.