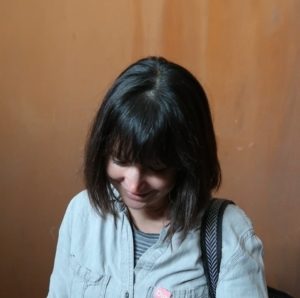 The corpse’s hair had been shellacked to its head, which was strange, considering how the spirit who used to animate the corpse felt about grooming. In all his days, the spirit who used to animate the corpse never used “product” and his granddaughter remembered that was just the way he always said it. “Product.” He’d wag his uncombed head above the cutting board, slicing off bits of cheddar wheel and stale bread, Ploughman’s Lunch, which often hurt the girl’s loose teeth. “So much the better,” he’d say. “Maybe there’s a nickel for you yet.” A nickel was small potatoes. An insult. Inflation had made it so that the going price of a lost tooth was closer to four or five dollars by now. But the girl couldn’t tell if he was kidding and worried that discussing these changes would incense the old man, who preferred things to stay the same. The girl herself liked changes of all sorts, or at least, she suspected she did. The new teeth cutting through her gum line were pleasingly ridged. Her smile, a shifting landscape.

The girl refrained from telling the man many things during the afternoons he watched her, knowing how their interests failed to align. She read books for pleasure, used words the man had never heard, turns of phrases she knew he’d find impertinent. The old man owned very few books, mostly volumes of silly puns and rejoinders. He had a fifty-cent piece glued to his threshold meant to fool unsuspecting visitors into bending down to pick it up. The girl had never bent down, being there, as she was, the day he affixed it, watching his sausage fingers operate the glue gun, hearing the ghostly groan of his bones when he pulled himself off the floor.

Read the rest of this piece here: https://huskzine.com/issues/husk-1-1/ploughmanslunch/

“I Wanted to Tell You Something,” by Erin Osborne (Fiction R...